The traditional owners called you a keeping place - Toolangi – 'the place of the tall trees'. White settlers renamed you Mountain Ash because your pale timber reminded them of a European hardwood of the same name, but you
bear no connection to that world. You are an evergreen home to plants, insects, animals and birds entirely unique to this place, some harking back to the ancient time of Gondwana. Undisturbed, you have towered over this cool, wet
land for millennia, like a sentinel, keeping watch over the forest understory. In the time before white settlement, you sometimes survived five hundred years untouched by the crack of lightning or the inferno of fire. You had no other natural enemies then.
Reaching one hundred metres and more, you grow quickly, straight as a die, to the heavens, while your roots burrow down deep into the rich, brown soil, establishing intricate exchanges of information from tree to tree. Your sturdy lower trunk is encased in rough bark while your ramrod upper trunk is mottled and smooth, interrupted only by ribbons of rusty, dead bark that billow downward, sometimes catching and carrying fire for kilometres through the
air like tinder. Side by side you create a mighty cathedral of habitat, absorbing the carbon like no other forest species on earth and catching and purifying the water for all the peoples of the big cities and surrounding regions. Embroidered with a mantle of white flowers, glossy green leaves and woody, conical fruit, you are the very tallest flowering plants on the earth.

Today, yellow bellied gliders, endangered lead beater possums, wrens, boo book owls, rosellas, yellow-tailed black cockatoos and rare spot tailed quoll still inhabit your boughs and hollowed trunks. Wedge tailed eagles continue to nest in your high branches where they can find them, while tiny spotted tree frogs, lizards and snakes continue to seek shelter in the crevices of your rough bark. Even the indolent koala dines on your foliage, but rarely as a first choice – such heights to climb! And people too have long sought protection in your wide, hollowed trunks. Each year at the commencement of the cool season, before white settlement, you would witness Lowandjeri Bulluk families
wending their way through the ferns on the rainforest floor to campsites near current day Korumburra and Poowong. There they would meet with neighbouring Yalloc Bulluk Bunurung people for social gatherings as well as important ceremonies. Precious cultural, practical and spiritual knowledge would be shared by elders under your protective shadow using the now lost languages that held your secrets. And old sepia photographs from the late 1800s tell us that your huge, fire-damaged tree trunks generously provided shelter even to those same early white settlers who had come to cut you down. But much has changed since then. You have observed the dwindling away and the devastation.

Victorian Government Botanist Sir Ferdinand Jakob Heinrich von Mueller, was the first to record your existence in English. In 1871 he coined the botanical name 'Eucalyptus Regnans' noting that you were 'the loftiest tree in British
territory'. And having identified you, claimed you and noted your regal nature, this new colony of settlers commenced to cut you down. The gold rush of the mid 1800s brought hundreds of fossickers into the South Gippsland high country forests where today we find the town of Leongatha. Eager to stake their claim of land at £1 per acre, they set about with crude axes and saws to cull the tall straight trees for timber and land. Witness accounts describe how the resounding crash of the forest giants would reverberate for miles, causing hardened workers deep in the bush to down tools in silent homage.

Within decades, whole forest ecosystems were cleared and tamed to make way for neat, rolling pastures that reminded settlers of home and accommodated their European animals. In 1861, the Acclimatisation Society of Victoria introduced European birds and plants to your environs to enliven the unfamiliar silence of these alien forests. Particularly mighty specimens were felled just to measure and record their length in the Guinness Book of Records. So wide is your ground level girth, that the 30 metre wide stumps of large felled trees could not be milled and still lie rotting, one hundred years after they were butchered for woodchip or newsprint or timber flooring. In 1970, when you were still felled by hand with cross-cut saws, axemen reported that the sound of air could be heard being sharply drawn into your wounds. They called this the sighs of the dying tree.

What else causes you to sigh from your vantage point today, oh giant Toolangi, now that you are cordoned into remnant forests? How difficult to be a keeping place for the living forest when daily, you see the silent, hidden creep of species loss and the steady collapse of ecosystems as your old tree cavities disappear. You see the ever encroaching settlement of humans who now prefer to walk on laminate, floating boards that mimic your natural timber markings. You see the advancing dangers of climate change. Scientists say we have 50 years or so before the remaining high country forests die. How can we keep these vital places for the Victorians of the future? If only we had your ability to witness. 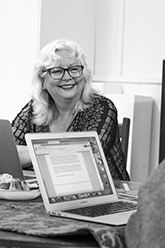 Anne Taib has been a teacher of writing and academic language and literacy for 40 years. Since May 2020 she has been exploring her own creative writing process via a weekly shared practice with the Loch Writers Group. Anne is a member of Writers Victoria and currently works at Monash University as a Learning Adviser.