A drone flew overhead and the people on the footpath held their hands flat like visors, saluting at the sun as it stretched its rays down upon them. They knew that the drone was taking photos of their homes from up high. Their cottages and large backyards had now become desirable Victorian homes in the country, with enough land for raised vegie beds, a hand built pizza oven and a few designer chickens or ducks; a very attractive real estate offering for isolation-jaded city dwellers. The people could sell their homes for SO much more money than Pre-COVID-19. A little flicker of joy began in their sphincters and rose up to warm their intestines.

Tired of their plastic bones, the neighbourhood dogs barked at the plastic bird. A van drew up unseen behind them. The man from Toll jumped out and looked briefly upwards at the drone. In his hand he held an iPhone up about a foot in front of him and he used his peripheral vision to quickly scan the numbers on the fences. He was eager to get the job done, the last delivery of the day. His iPhone was screening the first ever photos of Mars that the Perseverance Rover mission was capturing. The Toll delivery man was utterly gripped by the panorama of the Red Planet. Mars' Jazero Crater came in and out and in and out of view. The man from Toll identified his target address, trotted down the path and placed the Ikea parcel onto the doormat. He knocked with uneven, slow, distracted clunks on the front door.

The audio from his iPhone said, "Beginning constant velocity." His whole body froze with excitement. The female voice from Nasa announced historically, "Touchdown confirmed. The Perseverance has landed safely on the surface of Mars, ready to start seeking the signs of past life."

The man from Toll was so ecstatic that he forgot to hand over the parcel to the elderly woman who had just opened the door. Instead he pumped his fist into the air and shrieked like a Banshee as he danced his way back out to the footpath, jumped into the Transit and drove away.

The people watching the drone looked at him briefly, 'Another bloody person from Brunswick', one of them muttered and took no more notice.

It was a while since Joan had received a package. They were few and far between in the Golden Acres Care home, where she had lived since her husband had gone up to Heaven. Here, at her son's house, her old home and shop, they seemed to rain down from above in plentiful abundance. Ronnie was always taking deliveries, parcels packed with sweets for the sweet shop that joined the house; lollipops, fairy floss, crinkly little rattly plastic bags filled with honeycomb, rocky road and aniseed rings. And there was Ronnie now, out on the footpath with the neighbours, a giant jelly snake hanging from his mouth and nestling its body between his man boobs as he too gazed upwards at the silly buzzing bird.

Joan was a lean and remarkably muscular old stick, though they told her her head was going. She had spent many hours wondering where it was going, whilst threading aniseed rings onto candy canes, a task that Ronnie gave her to occupy her for a while, as he unpacked new stock or served customers in the shop. The task reminded her of something, though she couldn't think what.

Joan often examined the muscles of her upper arm, giving them a good old poke, then winding the loose brown skin around them, as if to wrap them up for another day. Her days in the sweet shop were over but her taut muscles were a physical memory of all the boxes she had lugged to and fro, feeding the sugar addictions of the local community.

Joan lifted up the parcel from Ikea and took it into the kitchen and placed it on the table. She picked at the sellotape a little with a finger then stabbed it with a biro, releasing the cardboard from its smothering embrace. As she loosened the separate boxes inside, chrome objects began to appear, rather like the pieces of a Meccano set, and in the corner of one of the boxes was a small right angled implement with an extraordinary profile. She threw that away.

Joan caressed the simplest piece, a shiny rod with brackets at either end. It felt good, cold and smooth and somehow familiar. She looked up. There, amongst the tarnished saucepans and sieves with holes still caked with pasta, clinging on with butchers' hooks, was the same rod as the one she held in her hand.

"They should be together," she said out aloud.

Things in pairs are always happier, she thought.

In 1982, Joan had had a new kitchen installed, one with a stack of lovely wooden drawers for the tea towels, the plastic bags, silicone muffin trays, tin foil, cling wrap and baking paper, as well as a miscellaneous one for the general ephemera of life, like seed packets and rubber bands. Joan slowly pulled the drawers out from the stack, drawing each one a little further out than the one above, until she had a neat set of steps onto which she climbed briskly, landing on the kitchen bench top. Her Dr Scholls gripped the slightly pitted laminate easily.

Then, Joan reached out with one hand until her fingers grabbed the tarnished metal rod that was attached to the ceiling, her body a conduit between the ceiling rod and the new shiny one in her hand. As she did so, all her children appeared, sitting around the kitchen table below, shovelling parmesan from a tin onto Bolognaise. She heard the sucking as they siphoned spaghetti into their mouths and she felt the warmth of their breath, their noise, their presence. Sports carnival wins, night terrors, periods, warts, chilblains and sinus infections flooded her cerebellum and she became so off balance that her body swung out over the tables like a pendulum. Instinctively the arm holding the new rod reached out until the bracket on the end of the rod snagged on the picture rail opposite. The memory inside Joan's muscles then transported one leg on top of the row of kitchen cabinets and the other over the open kitchen door, just as Ronnie came through it below.

"Mum?" He surveyed the kitchen for his mother, the chair where she usually sat was empty. Then he left, deciding that she must be in the garden.

Joan settled herself on top of the kitchen cabinets, her now-resting hand stroking the mat of dust that had formed up there, caressing a bouncy little rubber ball, a clip-on-koala, the instructions for the sandwich maker and a couple of champagne corks. In her heart she saw the day that Ronnie had married Edward, her relief at his happiness, her husband beside her for this new kind of ceremony. The child, Carly, that Ronnie had had with a woman, was standing beside him as he proclaimed his love for Edward. The dopamine coursed through her body. Her eyes began to water and the vision faded.

In the very corner, where two walls met the ceiling, Joan spied a Daddy-Long-Legs propped up in very fine sheets of cobweb, a few smaller spiders of the same type suspended with their feet held together. They looked like those seeds that sail through the air when the wind blows, she thought. Her hand reached out to touch one but the hand became that of her daughter, Gail. Little Gail's tiny fingers plucked a seed off the stalk and brought it closer to her eyes to examine, then she cast it to the wind and chased it out of Joan's view. The veils of cobweb became hospital sheets and once again Joan saw that Gail was gone forever. For a moment Joan lost all vision entirely.

When she was back inside her body again, she found that she couldn’t move at all. Something pink had her in its thrall. She tried to free herself from it, arching her back, her arms and legs no match for the pink quick sand that surrounded her.

At this moment Ronnnie came into the kitchen again and looked down. "There you are Mum. I thought you said you didn't like Carli's beanbag." Joan reached her arm up to Ronnie and he held out his own, their hands clasping
each other, as Ronnie pulled Joan up onto her feet. Joan wrapped her arms around the equator of him and squeezed hard.

The man from Toll had arrived home early that day. Now he lay with his 5 year old daughter on her single bed. They had watched countless YouTube videos together, watching the room full of cheering people at NASA, the initial launch of the Mars Rover billowing clouds of dust into the air and the almost hyperreal footage of the clawed creature landing on Mars. The man from Toll, had told his daughter about the billions of billions of stars in the Universe, the potential for planets not unlike our own, the minerals to be discovered and mined, the unimaginable, the inconceivable, the infinite.

His daughter was asleep, her head resting on her father's shoulder. The man from Toll kissed his daughter's forehead, got up and turned out the light. 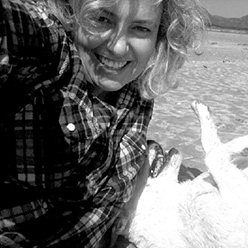 Melissa Austwick has been writing poetry since she was six and is now enjoying writing short stories. Melissa has a degree in English Literature and Political Science from UTAS. Growing up in Tasmania has provided adbundant inspiration and sometimes imbues her work with melancholy and black humour. Melissa now lives in South Gippsland and is a member of Writers Victoria and is a founding member of the Loch Writers Group. She is a gardner and florist.